A lack of a good night's sleep can affect not only the child, but everyone in his or her family. If you're bleary-eyed from night after night of waking up with your child, there are a number of lifestyle interventions and sleep aids that can help.
What causes sleep disorders in children with autism?
Researchers don't know for sure why autistic children have problems with sleep, but they have several theories. The first has to do with social cues. People know when it's time to go to sleep at night, thanks to the normal cycles of light and dark and the body's circadian rhythms. But they also use social cues. For example, children may see their siblings getting ready for bed. Children with autism, who often have difficulty communicating, may misinterpret or fail to understand these cues.
Another theory has to do with the hormone melatonin, which normally helps regulate sleep-wake cycles. To make melatonin, the body needs an amino acid called tryptophan, which research has found to be either higher or lower than normal in children with autism. Typically, melatonin levels rise in response to darkness (at night) and dip during the daylight hours. Studies have shown that some children with autism don't release melatonin at the correct times of day. Instead, they have high levels of melatonin during the daytime and lower levels at night.
Another reason children with autism may have trouble falling asleep or awaken in the middle of the night could be an increased sensitivity to outside stimuli, such as touch or sound. While most kids continue to sleep soundly while their mother opens the bedroom door or tucks in the covers, a child with autism might wake up abruptly.
Anxiety is another possible condition that could adversely affect sleep. Children with autism tend to test higher than other children for anxiety.
What kind of effects do sleep problems have?
Not getting a good night's sleep can have a serious impact on a child's life and overall health. Research has shown that, in children with autism, there is a connection between lack of sleep and the following characteristics:
•                Aggression
•                Depression
•                Hyperactivity
•                Increased behavioral problems
•                Irritability
•                Poor learning and cognitive performance

If your child isn't sleeping, there's a good chance you aren't, either. One study showed that the parents of autistic children sleep less, have poorer sleep quality, and wake up earlier than parents of non-autistic children.
How do I know whether my child has a sleep disorder?
Every child needs a slightly different amount of sleep. In general, these are the amounts of sleep children require, by age:
•                Ages 1-3: 12-14 hours of sleep per day
•                Ages 3-6: 10-12 hours of sleep per day
•                Ages 7-12: 10-11 hours of sleep per day
•
If your child regularly has difficulty falling asleep or wakes up repeatedly throughout the night, it might be a sign of a sleep problem. To know for sure, make an appointment with your child's pediatrician. The doctor may refer you to a sleep specialist or an ear, nose and throat doctor.
It can help to keep a sleep diary for a week to track how much and when your child is sleeping. You may include any snoring, changes in breathing patterns or difficulty breathing. You can share this diary with your child's doctor and any specialist involved in treatment.
How can I help my child sleep better?
Sleep medications are generally used as a last resort with children. There are a number of lifestyle changes and natural sleep aids that can improve sleep time and quality in kids with autism:
•                Avoid giving your child stimulants such as caffeine and sugar before bed.
•                Establish a nighttime routine: give your child a bath, read a story, and put him or her to bed at the same time every night.
•                Help your child relax before bed by reading a book, giving a gentle back massage, or turning on soft music.
•                Shut down television, video games, and other stimulating activities at least an hour before bedtime.
•                To prevent sensory distractions during the night, put heavy curtains on your child's windows to block out the light, install thick carpeting, and make sure the door doesn't creak.
•                Ask your pediatrician about giving your child melatonin just before bedtime. This dietary supplement is often used as a sleep aid to help people get over jet lag. It may help normalize sleep-wake cycles in autistic children who have sleeping issues, and research done so far finds that it's safe and effective.

Adapted from WebMD
Posted by AJ at 5:49 PM

Journey Tools on the Web

We are a Team!

Ms. Gamee goes to the Dentist

A client at Autism Journeys has a difficult time at the dentist. My co-workers thought maybe having me by her side would ease a bit of the anxiety. Since I’ve never been to a dentist’s office, Mom thought it best to test my skills out with her own children first.

Jordan, Carter, Mom and I went to the dentist on Wednesday. Jordan has always struggled to remain calm at the dentist. Usually, he needs laughing gas just to get his teeth cleaned. This was to be Carter’s first “real” visit. This was my chance to show Mom how I can help.

Mom had me get up in the chair with Jordan. Jordan was still nervous, but was very preoccupied by me. He played with my ears and rubbed my head throughout the entire cleaning. I rested on his chest to provide him some deep pressure comfort. No tears and no laughing gas! It was over very quickly. Mom and the dentist were so proud of Jordan. Most importantly, Jordan was really proud of himself.

After Jordan, it was Carter’s turn. After seeing me with Jordan, Carter decided he wanted me on the chair with him too. At first, Carter was nervous when the instruments made those high pitch sounds. I could sense he was starting to wiggle, so I gently crept up a little higher on his chest to help hold him steady. It worked. He relaxed, opened his mouth and was able to tune out the remaining sound with headphones.

As for me, I quite enjoyed all the attention. The noises didn’t bother me a bit. The yummy smells of bubblegum and strawberries were quite interesting, but I think I’ll stick to my poultry flavored toothpaste at home. When we were all finished, the dentist offered me a job. Mom said I passed the test with flying colors. I am now available to accompany any clients to the dentist. If you want me to join you at your next visit talk to my Mom, Kate.

Here’s to a healthy and happy smile.

Check out Gamee's article in the Wasatch Way! The newsletter has great info for any dog lover. 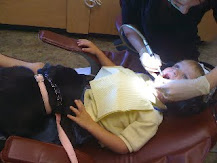 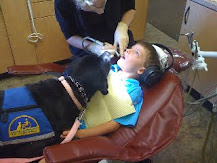 Want to know more about where I came from and the school I went to? visit these links

Holy cow! Or in my case, holy dog! What a crazy couple weeks I’ve had. Life in the spotlight is ruff. Each week I’ve been able to meet more of the families who visit Autism Journeys. It’s been fun to try new things with each of them. One of my favorites is playing fetch. Sometimes the kids are learning to take turns, and other times they’re working on speech and communication. Mom says I’m doing a wonderful job being patient and waiting for the kids to give me commands. One of my other favorites has been going on walks. It’s been so nice to get outside and take in the fresh air. Being traced with sidewalk chalk was fun too.

KSL news story about ME!

The local news heard about my new position at Autism Journeys and asked Mom if they could come out and see me in action. Ed Yeates from KSL, Channel 5, spent two hours watching and filming me with clients. KSL aired the story on Monday, June 14th. It was awesome! If you missed it, check it out by clicking the photo below.

I finished up last week with a CCI-Wasatch Champions, BBQ on Saturday. What an amazing party! It was great to meet some of my counterparts (other CCI service dogs) and their families. There were graduate dogs like myself as well as dogs in training. I got lots of attention, what with the recent media coverage and all. Although, those little puppies in their training vests certainly stole the show. Mom couldn’t get enough of them.

That said, it was the older, more mature (aka trained) dogs like myself that won all the games. I came in second in the musical hula-hoops. It’s musical chairs but with hula-hoops. When the music stopped the dogs had to sit in the hoop. After musical hula-hoops we played wet t-shirt relay races. I must say I don’t really understand what the point of the race was, other then to embarrass all the dogs. Personally, I don’t get it, but Mom and my brothers, along with all the other people sure got a big kick out of it. Apparently dogs in wet t-shirts are adorable.

After the humiliating t-shirts were off, the other dogs and I spent the rest of the time playing in the pools, chasing beach balls, and getting insane amounts of hugs and kisses. We can be such party animals! All in all, it was an amazing party. I can’t wait for next year! Thanks Wasatch Champions! 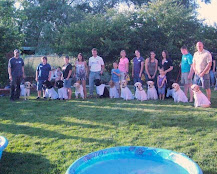 I can’t wait to see what they have planned for me next. If you have any fun ideas for me, feel free to post them. I’ll make sure Mom reads ‘em.